Background
The primary purpose of the Ferret Canine Distemper Fund is to provide emergency financial support to any ferret shelter or hospice in the world that is faced with a suspected or confirmed outbreak of canine distemper. Ferret shelters are the most vulnerable to an outbreak because of the transient nature and incomplete histories of the ferrets they rescue.

Case Study
The Ferret Association of Connecticut was stricken with the canine distemper virus in the summer of 2011. The outbreak exposed 39 ferrets. FACT and 1 adoptive family lost a total of 15 ferrets to the disease. 1 ferret that had symptoms recovered due to the near round the clock care of his adoptive mom.

The ferret with the first symptoms, unrecognized as CD at the time, arrived at the shelter on June 17th. A second ferret began to show the same suspicious symptoms on June 23rd.  Upon the advice of our vets, we very quickly began administering booster vaccines for all ferrets in the shelter as well as all ferrets that had been exposed to shelter ferrets (i.e. ferrets that had been adopted out or fostered out during the time that the first ferret arrived). In addition, we were advised to immediately begin an experimental regimen of interferon and Vitamin A with the advice and counsel of consulting veterinarians. We were fortunate in that Washington Ferret Rescue (WFR) had some of the latter on hand remaining from a CD outbreak they experienced earlier in the year which they sent to us. Both are needed to begin treatment as soon as possible.

The total estimated cost of the outbreak, including treatment, hospitalizations, staff support, and humane euthanasia in fatal cases, was approximately $4,000 after all the discounts that we were able to negotiate or about $115 per ferret. FACT was fortunate to have an emergency fund on hand to order supplies immediately, however, most ferret shelters do not have a financial cushion anywhere near the size needed to deal with such a shelter catastrophe.

Consensus
A shelter needs to have immediate access to funds for self or veterinarian provided vaccinations of an approved CD vaccine. If an adequate supply is not immediately at hand it needs to be sent via Express Service to the shelter or their veterinarian’s office from a supplier.

Additionally, the shelter needs to have immediate access to funds for supportive medications such as the Vitamin A FACT needed as well as for the interferon or any other veterinarian recommended medication to begin treatments. Further, if the shelter operator works a full-time job, even with volunteer staff, sometimes help is needed or intensive care at a veterinary clinic is required to provide the round-the-clock care to minimize deaths.

If we consider that the average shelter houses between 10 to 20 ferrets, then a conservative estimate of an on-hand fund of $1,000 is not unreasonable to have to begin aggressive treatment in the event of an outbreak of canine distemper. Obviously, where an outbreak occurs is going to affect the cost as is the availability of vaccines, veterinary services and how many ferrets are in the shelter.

But how many shelters have that kind of money at their disposal? Few, if any. Even if the ferret community were able to begin to fund-raise immediately, it would most likely take anywhere from two to three weeks at a minimum to begin to see funds flow to that shelter and in the interim little lives are going to be lost.

The Result
The purpose of the Ferret Canine Distemper Fund is to have immediate funds available and accessible in the event of an emergency canine distemper event. The fund will be there to immediately pay the veterinarians and suppliers to obtain needed supplies and services in the event of a suspected/medically confirmed CD outbreak. The group behind the fund will then begin a concerted effort to raise more funds for the affected shelter if needed and to replenish the fund. In short, the fund will operate as an emergency "cushion" fund accessible to ferret shelters.

Accessing the Emergency Fund
Any shelter that suspects they have an outbreak of canine distemper should contact us immediately.  We can be reached directly via email or on Facebook. That will trigger an emergency consultation with the fund administrators who are charged with approving a grant. As appropriate, we may consult with our ferret veterinarian advisors to help quantify the need and determine the best method/s of support. For a recent outbreak in the Chicago shelter, funds were released; supplies ordered and were delivered for booster CD vaccinations within 3 days of initial contact.

It is extremely important that the shelter not delay in contacting the Fund! It can take up to two weeks to confirm that suspicious deaths are the result of canine distemper. Even if the shelter does not yet have confirmation, the fund can spring into action to get an initial supply of booster vaccinations delivered. That is the critical first step in dealing with any suspected outbreak.

Many vets have not seen canine distemper firsthand and may be reluctant to provide a tentative diagnosis. However, the symptoms are almost unmistakable once you are aware of them. 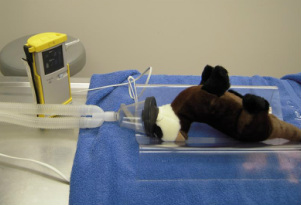 ANNOUNCEMENT: As of September 1, 2018, the Ferret Canine Distemper Fund has indefinitely suspended providing Shelter Vaccination Grants due to lack of adequate ongoing funding. The Fund still maintains an adequate balance on hand in order to be able to react to any emergency CD shelter outbreak in accordance with our original mission. We regret this action, but without a steady source of support, have no other options.

In the event of an outbreak, the group founders are prepared to assist in providing emergency funds to battle a shelter outbreak and ading in supporting additional fund-raising efforts.

Background
The primary purpose of the fund is to provide emergency support in the event of an outbreak of canine distemper in a ferret shelter. However, we also want to be able to support shelters to obtain CD vaccinations to avoid an outbreak.

The primary target for Vaccination Grants are those shelters dependent upon a veterinarian to provide vaccinations to the ferrets in their shelter. These shelters are generally unable, for various reasons to obtain lower cost "self-vaccinations" of the canine distemper vaccine.

For ferrets with an unknown CD vaccination history, the current medical recommendation is to provide a series of 2 or 3 CD vaccinations approximately three weeks apart in order to ensure the ferret has developed appropriate protection against CD. For almost all shelters, this cost alone for even otherwise healthy ferrets can be a financial burden and often exceeds the adoption fee. The fund seeks to help mitigate the cost through the Ferret Shelter CD Vaccination Grant program.

Overview
Any Ferret Shelters Directory listed shelter will be eligible to apply for a grant from the CD Fund up to two times within each twelve month period. Listing in the directory is free to any shelter in the world.

Grant Award
The grant award will be equal to $5 USD (or equivalent) per ferret vaccinated. Shelters may apply every 6 months for a grant. A minimum of 5 ferrets must be vaccinated during that period. The minimum amount of each grant will be $25 USD. Currently, the maximum amount of each grant will be $250 USD (or equivalent). The rules are subject to change depending upon the status of funds available.

Any shelter, hospice, halfway house or rescue located in Australia, Canada, the United Kingdom or the United States  whose veterinarian certifies via email, fax or hard-copy a) the number of canine distemper vaccinations, lot numbers and product/s used the day of the clinic or over the grant period applied for on behalf of the shelter. (Statement can be on vet letterhead or a copy of the shelter’s vet record).We also ask, that the shelter or a member, if feasible, join the Xavier - A Ferret Abroad Facebook group to provide feedback to group members.


Cost to the Shelter

The goal is to fund at least $500 in grants annually As the fund balance grows, the number of grants available may increase. Grants are available as long as the base $1,000 in CD emergency funds remains intact.

Note: The purpose of joining the Xavier Facebook group is to keep our primary membership and donor base informed of our activities; not, to discourage shelters that do not have a Facebook account from applying. Lack of a Facebook shelter account or the ability to host one of the plushies for a visit will not preclude eligibility for a grant. 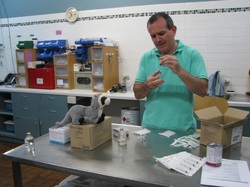